Cumbria Airfields in the Second World War: Including the Isle of Man by Martyn Chorlton 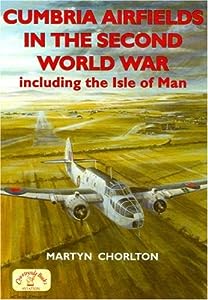 (click images to enlarge)
£12.99
As of 2021-01-20 16:27:51 UTC (more info)
Not Available - stock arriving soon
Buy Now from Amazon
Product prices and availability are accurate as of 2021-01-20 16:27:51 UTC and are subject to change. Any price and availability information displayed on http://www.amazon.co.uk/ at the time of purchase will apply to the purchase of this product.
Product Information (more info)

Description of Cumbria Airfields in the Second World War

I have to confess that when I first read the title of this book I was a little surprised. I should not have been, for of course I know that Cumbria is not entirely covered in mountains; there are coastal strips and areas of more level land in the north, south, east and west of the county well capable of providing space for airstrips. And they did. This book from Martyn Chorlton is a valuable contribution to the history of the county during the mid-20th century, and especially the location of the airfileds at places such as Cark, Crosby-on-Eden and Millom.

The Dawn of Green: Manchester, Thirlmere, and Mode...

only £13.50
Not Available
View Add to Cart
CERTAIN CONTENT THAT APPEARS ON THIS SITE COMES FROM AMAZON SERVICES LLC. THIS CONTENT IS PROVIDED 'AS IS' AND IS SUBJECT TO CHANGE OR REMOVAL AT ANY TIME.