Wings Over Sands, by John Nixon 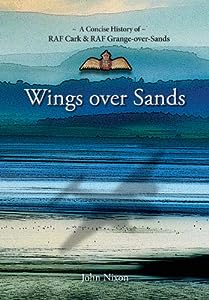 (click images to enlarge)
£18.99
As of 2021-03-02 02:26:44 UTC (more info)
Not Available - stock arriving soon
Buy Now from Amazon
Product prices and availability are accurate as of 2021-03-02 02:26:44 UTC and are subject to change. Any price and availability information displayed on http://www.amazon.co.uk/ at the time of purchase will apply to the purchase of this product.
Product Information (more info)

Wings Over Sands: A Concise History of RAF Cark & RAF Grange-over-Sands. I thought I knew the area, but until I saw this book I had absolutely no idea that there had been a proposed airship factory to be built at Cark during World War I or pilot training during WW2.  Where does this book fit in our category structure? Well, even though it never materialised, given the proposed factory I'm going to put it under Industry along with Wings on Windermere as well as in the History section.

only £6.59
Not Available
View Add to Cart
CERTAIN CONTENT THAT APPEARS ON THIS SITE COMES FROM AMAZON SERVICES LLC. THIS CONTENT IS PROVIDED 'AS IS' AND IS SUBJECT TO CHANGE OR REMOVAL AT ANY TIME.